Bear with me... again

A few years ago I asked you all to bear with me following the birth of my son.

Well, a few days ago my wife gave birth again to a beautiful baby girl. She weighed 8lbs and both mum and baby are doing fine.

As you might expect I'm going to be a little bit busy with family and the frequency of posts may dip over the next few weeks. I'll get back to a normal service once things settle down here.

In the meantime I'd like to introduce you all to Eve: 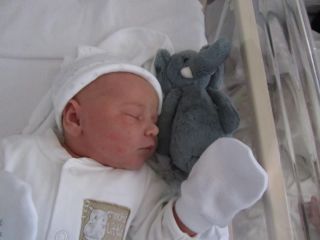 So that's 1,000 healthcare and medicines related posts in about 5 and a half years.

And while I'm reporting such figures there are

Unsurprisingly, Google provided the most search engine referrals (over 30,000 in 2010) to the site with Yahoo! in second place but a massive margin. But most visitors (over 90%) come straight here!

When I started this blog I really had no plans or expectations of where it might lead so I had no idea that I would end up here.

There are two things that give me immense satisfaction from running this site though.

The first is that the National Prescribing Centre incorporated a blog into their interactive site based on the success this site.

The second is the occasional feedback I get from readers telling me that what I write is useful to them and is helping them in their work.

So, if you like what I do here post me a comment below and to use the words of Frankie Howerd, "If you've enjoyed it, tell your friends!".

.. starts tomorrow, as I'm sure you've noticed. I hope that you have all had a pleasant break from work and are ready for the challenges that will come in the year ahead.

I have taken the opportunity presented by this quiet time of year to check some areas of this site and have found some glitches that I've hopefully now fixed. My apologies to those of you who have subscribed but have not been getting your email notifications.

[Update] It would seem the glitch was a little harder to fix than I first thought but I'll keep working on it!

..will resume tomorrow. I hope you all had a pleasant break from work and are ready for 2009!

Copyright © 2005-2022 Prescribing Advice for GPs
Author
This blog is maintained by
Matthew Robinson.

Prescribing Advice for GPs is powered by ClassicPress.
Connect to our RSS or Atom Feeds.