My wife gave birth yesterday to a beautiful baby boy. He weighed 7lb 9oz and both he and mum are doing fine.

As you can imagine I'm a bit pre-occupied with my new son just now to be writing many posts but I'll get back to it soon so keep checking back!

In the meantime may I introduce you all to Max: 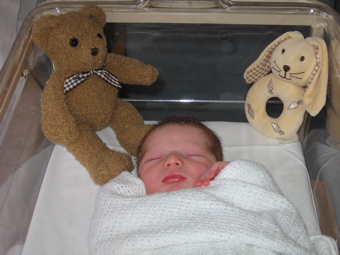 Two large studies of hard outcomes in patients with chronic obstructive pulmonary disease (COPD) have been published this week and both failed to reach statistical significance.

The first study, published in the Annals of Internal Medicine compared tiotropium in combination with placebo, salmeterol or fluticasone and salmeterol. The primary endpoint was exacerbations requiring treatment with steroids or antibiotics. There were no statistically detectable differences between the three arms.

There were differences in some secondary outcomes such as improved lung function and reduced hospital admission however as the study was not significant for the primary end point these results should be interpreted with caution.

The second study, published in the New England Journal of Medicine compared placebo with salmeterol alone, fluticasone alone or a combination of salmeterol and fluticasone. The primary outcome was death from any cause with secondary outcome measures including lung function and frequency of exacerbations.

Action: These trial results are both disappointing; they add nothing to the evidence base for treating COPD. Clinicians should continue to follow the current COPD guideline from the National Institute for Health and Clinical Excellence.

The King's Fund has welcomed the review of the Pharmaceutical Price Regulation Scheme (PPRS) conducted by the Office of Fair Trading (OFT).

As reported yesterday, the OFT has recommended that the scheme is overhauled and replaced with a patient-focussed value based pricing scheme where the price paid is linked to the therapeutic benefits.

The King's Fund also state that this is the first systematic review of the scheme in its 50 year history and that it has never been clear whether the research and development made possible by the higher prices the NHS pay for branded drugs are of benefit to the United Kingdom.

The Association of the British Pharmaceutical Industry (ABPI) has defended the current scheme illustrating a £1.2 billion saving for the NHS identified by the National Audit Office. They also point out that primary care medicines still account for the same proportion of NHS spending as 10 years ago and that in real terms medicines now cost 21% less than 10 years ago.

The Department of Health must consider and respond to the OFT report within 120 days. The debate over the pricing of branded medicines is likely to continue until the response is made and perhaps beyond.

Action: Clinicians should ensure cost-effective use of medicines, including using generic alternatives where they are available.

The Regional Drug & Therapeutics Centre has launched a new series of publications under the topic heading of Academic Detailing.

Academic detailing is a practice often used in the promotion of medicines by the pharmaceutical industry; it involves a face-to-face discussion about a particular disease or drug related topic.

The Regional Drug & Therapeutics Centre list three papers that provide an evidence base for this approach and more information about applying this technique during practice visits and clinical meetings.

Finally, and perhaps most helpfully, access is given to some detail aids (currently six) that provide a brief summary of the evidence and key messages in a particular clinical area. These aids can be used during face-to-face meetings to steer the conversation and ensure that key messages are delivered to front line clinicians.

Action: Prescribing advisers who undertake practice visits will find these detail aids invaluable. Clinicians will also find them useful as an evidence summary.

The Office of Fair Trading (OFT) has completed a review of the Pharmaceutical Price Regulation Scheme (PPRS) and recommended that the scheme be reformed to deliver better value for money for the NHS and to focus research in areas where there would be greatest benefits for patients.

The PPRS scheme is voluntary and is negotiated between the Department of Health and the Association of British Pharmaceutical Industry (ABPI). It allows pharmaceutical companies to set their own prices for branded prescription medicines with constraints placed upon overall profit.

The OFT identified several treatments, including those for cholesterol, blood pressure and stomach acid where current prices do not reflect patient benefits. The OFT therefore recommend replacing the existing scheme with a patient-focussed value based pricing scheme where the price paid is linked to the therapeutic benefits provided to patients by the intervention. The OFT also point out that such schemes are already operational in countries like Australia, Canada and Sweden.

The BBC has reported the findings and in this article Dr Richard Barker, director-general of the ABPI, has defended the current scheme stating that, "as a country we pay less per head for medicine than most major European countries".

Action: Clinicians should be aware of the OFT report. It provides an indication that branded prescription medicines may be overpriced and therefore using generic alternatives may offer better value for money.

Copyright © 2007 Prescribing Advice for GPs
Author
This blog is maintained by
Matthew Robinson.

Prescribing Advice for GPs is powered by ClassicPress.
Connect to our RSS or Atom Feeds.